For our last event of 2015 we headed to the Shropshire Hills, staying at YHA Wildehope Manor. The hostel is a Grade I listed Elizabethan manor house with plenty of original period features. The stonework, staircases and general ambience are something special. Thankfully the showers and toilets are not from the 1500’s, looking quite modern.

On Saturday morning we had a short 20 minute drive to the pretty town of Much Wenlock where our walk would start. The weather forecast for the weekend looked pretty bleak but whilst it was overcast it was mostly dry, any rain being light and sporadic. The group consisted of the usual mix of regulars and first timers who were already beginning to get to know one another.

Our route would see us take the Shropshire Way towards the River Severn, which we would cross at Ironbridge. As it was around noon by the time we reach Ironbridge it seemed a logical place to stop for 20 minutes or so for lunch and the chance to use the toilets. The town gets its name from the famous Iron Bridge that crosses the river, the world’s first, completed in 1779 and formally opened in 1781. Being such a grey, overcast day the camera did not really see much action but I did take a quick photo of the bridge, converting it to black and white which seemed to suit the conditions. 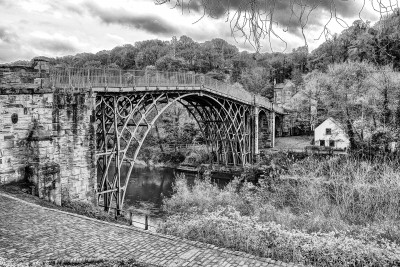 After the short lunch stop we continued to follow the riverbank heading west. We passed very close to Buildwas Abbey but could not see it since it is situated deep among trees, obscuring the view. Just before Sheinton we headed south on quiet tarmac roads back towards Much Wenlock. We arrived back at the cars in good time and headed back to the hostel for showers.

Our evening meal was at The Fox Inn, back in Much Wenlock at 6pm. Service was pretty prompt and people seemed to enjoy the food. We could not loiter all evening though as the table was booked later that evening and so we headed back to the hostel so that drivers could also enjoy a drink. Most of the group settled in the lounge close to the fireplace for a drink or two and conversation.

On Sunday we again aimed to leave at 9am. With the cars all packed we headed to Church Stretton for the start of our Long Mynd walk. The Long Mynd is one of the most popular walks in The Shropshire Hills. We parked in the lower Carding Mill Valley car park which was acting like a wind tunnel with hills both sides of the valley. Despite the windy conditions it was at least dry, though like Saturday overcast again. Unlike Saturday though this walk would be on much firmer and less muddy paths. Following the Carding Mill Valley we passed the upper car park and inviting looking National Trust tea shop where someone warned us of the high winds on the ridge where we were headed. With the ridge reached we turned left, battling the gusting winds as we headed for the trig point at Pole Bank. Conditions dictated that there would be no group photo at the summit as we continued to battle the elements until just beyond Pole Cottage where we turned left and began our descent towards Little Stretton. Had the lighting been more interesting I would have take lots of photographs on this section but I did at least take this one looking north east from just above Little Stretton. 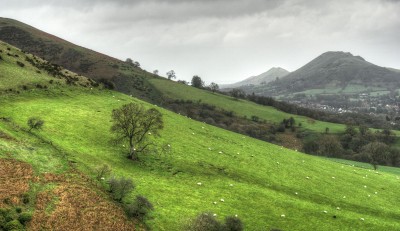 Once at Little Stretton we followed the road until a footpath left took us through woods back towards our cars. It was unusual to be finishing on an uphill section and a couple of tired people did feel the pace. By now it was also beginning to rain constantly and the group were glad to see the cars parked below us. The car park was still acting like a wind tunnel, my drivers door slamming into my shin, leading to some choice expletives on my part. Margaret’s car decided to head home but the rest of us wanted to find a tea shop since we wanted a ‘reward’ for the effort of the day. Once we found somewhere open we had the chance to dry off and choose something from the extensive menu. From the available options a hot chocolate and slice of Christmas cake spoke to me the most.

Treat over we then said our goodbyes and began the drive back to London where it seemed to rain almost constantly. It had been an enjoyable weekend in the Shropshire Hills despite the dull weather but I was looking forward to getting home and changed into some fresh warm clothes.