In early November we headed to the Isle of Wight for the weekend. It’s not a location we visit regularly, in part because of the added complication of the ferry and not knowing who will be able to drive. In the end 4 cars and 19 people made the trip, leaving Southampton on the 9pm ferry which saw us arrive in Cowes at 10pm.

Upon our arrival it was a short 15 minute drive to our accommodation at Woodside Lodge Retreat, via a quick stop at a small Tesco for some supplies. We had rented 3 lodges in total, 2 of which had their own hot tub. The standard of the lodges were very high and made for an enjoyable place to stay. 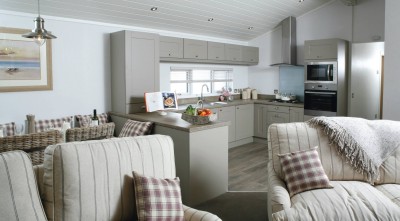 Our walk on Saturday began at Freshwater Bay. Our recent good luck with weather on trips seemed to have left us as we were faced with a little rain and strong winds. We took the coastal path towards the Needles, passing the Tennyson Memorial on the way. At the Old Battery some of us took a short break for a snack. The National Trust tea shop was even open for those that wanted a hot drink. The Old Battery is an interesting place, as well as the views towards the Needles you’ll find old cannons, revealing its history as a Victorian coastal defence location. It was also once a secret rocket testing site.

Our route continued along the coast past Alum Bay with the characteristic coloured rock, though in truth in such dull lighting it was not looking its best. Another break was taken at Colway Bay in front of the colourful beach huts. The rain had stopped quite early on the walk and by now there were even signs of the sun making an appearance. Sure enough as we left the coastal path to head inland patches of blue appeared and the temperature even seemed to climb. leading many of us to remove a layer.

We arrived back at Freshwater Bay a little after 3pm to a scene so different to when we had arrived. The sun was shining and we relaxed, watching the sea and taking a few photos before driving back to our accommodation. 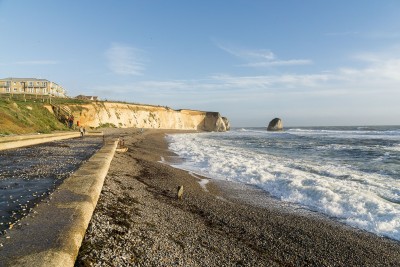 After showering we headed to the local pub for an early evening meal. We had placed our orders in the morning so service was quick. We had planned to head to Sandown to watch the fireworks from the pier but once people started to order desserts it was clear that we would not make it in time for the 8pm start. After leaving the pub we headed back to the lodges to relax and enjoy the hot tubs.

On Sunday our walk would see us walk the coastal path between Ventnor and Sandown. Ewelina led the group off as Di and I headed to the end point to drop my car. We eventually caught up with them in Shanklin just as they were eating their packed lunches. It was largely a dry day Sunday but again overcast with flat lighting. Most of the car drivers had decided to try and catch the 4:30pm ferry rather than the 6:00pm one we had originally booked. Once we arrived in Sandown most passengers had the chance to visit cafes as I took drivers to collect their cars back at Ventnor. Those on the earlier ferries made it in time. My passengers however returned to the lodges to get changed out of hiking clothes and tidy up the lodges before returning the keys and catching the 6pm ferry back to Southampton.

Despite the dull weather it had been an enjoyable weekend with good company, fresh air and top class accommodation. The hot tubs were the added touch of luxury and I’m already looking forward to our Norfolk / Suffolk trip in early February where we have another hot tub. If anything the accommodation we have booked there looks even more luxurious!