Our first event of 2016 was a weekend away walking the Dorset Jurassic Coast. We had booked sole use of YHA Litton Cheney on their Exclusive Hire scheme. Due to much lower occupancy rates in the low season many of their hostels are only open to groups wishing to book the entire property on this basis. For a London based group Dorset makes a great destination as it’s less than 3 hours drive.

On the Saturday our walk started in the attractive fishing port of Lyme Regis. Being a linear walk most of the group had some time to check out the town whilst another driver and myself headed to the end point of the walk in Seatown to leave a vehicle there. The walk was a short distance of 12km but involved quite a few hills, including the highest point on the whole south coast at Golden Cap. It was largely an overcast day but the sun did break through the clouds from time to time, leaving some interesting light patterns on the sea.

Once we reached the finish I took the drivers back to Lyme Regis to collect the cars. Once back at Seatown, it was getting dark and most of the group were enjoying the hospitality of a lovely country pub. There was enough time to get back to the hostel and shower before heading to the local pub for our evening meal.

On the Sunday once we had packed the cars and cleaned the hostel it was time to drive to Lulworth Cove. Our 10km walk was a classic that not only takes in Lulworth Cove but also the popular natural arch of Durdle Door. 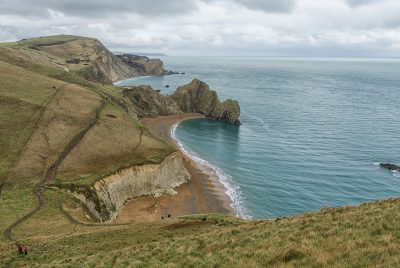 Again the weather was largely overcast but dry, not ideal for photographs but very pleasant conditions for walking. Once the walk was finished many of us ordered some food and drinks from one of the cafes before saying goodbye and heading back to London. To see more images from this weekend please visit the following Google + collection.